Why Do We Celebrate Memorial Day?

While Memorial Day may signify the beginning of Summer, annual cookouts, or mega sales to some, the real reason we celebrate this holiday is a little more special; it is a day to honor the servicemen and women who lost their lives during their service. With traditions dating at least as far back as the Civil War era when women decorated the gravesites of Confederate soldiers, this holiday, which was known as Decoration Day, became an official national holiday in 1971. 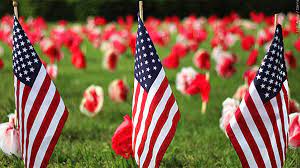 Though many Memorial Day celebrations and traditions have evolved over the years, all Americans are encouraged to pause at 3:00 pm local time to reflect on the importance of the day. Other traditions include flying the American flag at half-staff until 12:00 pm and then raised after that, and closing businesses in observance of the day.

Special thank you to the History Channel, USA Today, and the Department of Veteran Affairs for providing valuable information about Memorial Day!