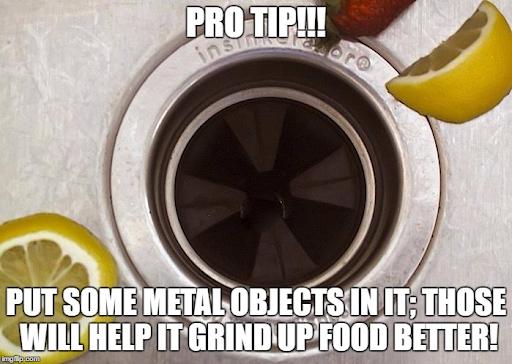 One of the most misused and misunderstood appliances is the garbage disposal.  While it is believed by many to possess limitless abilities, the world--and your kitchen specifically--is chock full of things that should NOT be put down the garbage disposal.  The following list is by no means complete, but it will at least give you a starting point for reference:

It is not a mystical black hole.

Since the list of what not to put into the disposal is extensive, it is fair to wonder what you CAN put down a garbage disposal.  The blades in the disposal itself are not the only item to consider in this question.  Apart from the blades, the drain line is not large enough in diameter to handle large quantities of anything.  While your disposal will do its best to grind up and dispose of whatever you ask it to dispose of, it is really designed to grind up only the small remnants of food left on your plate after a “clean plate” meal.

If you have accidentally put something down the disposal that was more than it could handle, you will find that the disposal has jammed.  If you continue to try to force the disposal to work (by using the reset button) without clearing the blockage, you will burn the motor of the disposal, which is a situation that calls for a replacement disposal unit.  If your disposal is jammed, but still makes a humming noise, turn off the disposal (at the breaker preferably), fish out whatever is causing the blades to jam, and use a food waste disposal allen wrench to free the blades.  Once the blades are moving freely again, turn the disposal on and dump four or five handfuls of ice into the disposal. You should be back in business!